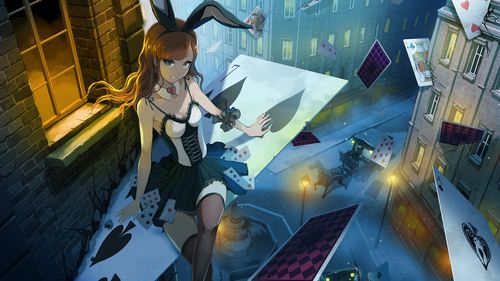 Eventually Wildcard met Amelia via confrontation. The two had a brief battle in which Amelia came out victorious in where Wildcard had an emotional breakdown, explaining the ways of the cruel world to Amelia before they part ways. Sometime, during an unknown period, Wildcard was supposedly killed by The Daughter of Hades.

Wildcard has a rather insane personality, sometimes doing things out of pure joy. She'd happily agree to destroy an entire world's worth of lives to get her goals achieved. Wildcard also has a split personality, one being described as happy or jolly and the other, serious. She named these two personalities Anabelle and Wildcard. She enjoys mostly Seafood and thus, claims it as her favorite. Anabelle enjoys sitting under the moonlight enjoying a nice warm batch of shrimp while she skips rocks across a large body of water. Wildcard's favorite colors, if they weren't obvious, are black, white and red. Her favorite colors are one of the main reason she deiced to go by Wildcard from then on.